In 1962 the renowned Dutch architect, graphic designer and furniture designer Gerrit Rietveld designed an advertising column with a shelter for the City of Eindhoven. The design was only produced after Rietveld’s death in 1964, but for various reasons was never used for its originally envisioned purpose. As a result, as years went on, no one could remember why the structure existed and who had made it. Like so many objects in public space, it lived on in anonymity.

At the end of the 1980s, the Rietveld structure was rediscovered and received a new location and a new function. It never actually became a bus stop either, but did become a place where artists, designers and architects could show their work or realise a special project.

From November 2010 until November 2011, artist Geert Mul and Maurer United Architects transform the Rietveld Bus Stop. They were inspired by the map of Eindhoven made out of mosaic tiles located on the wall under the roof of the bus stop. It is one of the first city maps in public space. The square tiles from which the map is constructed give the image a pixellated character that echoes the early imagery of the computer age. In this design, Rietveld strayed from the typical red, yellow and blue colours of De Stijl. With the colours he chose to use (red, green, blue), he inadvertently made a connection to the television and computer age.

This contrast between pigment-based colour mixing (Red-Yellow-Blue) and light-based colour mixing (Red-Green-Blue) marks the transition from the pre-media era to the media era for Mul and Maurer United. For them, this was the motivation to explore the Rietveld Bus Stop as a physical manifestation of the media era. They replaced the original fluorescent lights in the column with LED lights in red, green and blue. Through the colour change of the LED lights, various layered images are made visible on the column. This interplay between light and image creates unexpected experiences and multi-layered messages.

The images in the top part of the column refer to universal worldviews and colour systems, including those of De Stijl and Albert Munsell, an American painter who developed a system to numerically describe colours. The Germanic worldview in the form of a tree of life and a thermographic image of earth taken from a satellite are also shown here. In the middle panels, colour models are explored through architectural forms and vice versa. In the bottom of the column we find images of media in which colour systems are applied: the screen, the television, the CD and the Pantone colour wheel. The practical counterparts of the universal systems in the top of the column are represented in the bottom. The column as a whole deconstructs these ‘universal’ colour models and the way in which they take form in our daily lives.

This project was made possible thanks to the support of the Social Development department of the City of Eindhoven. 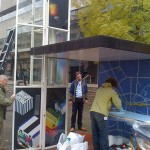 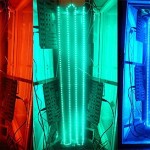 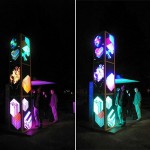 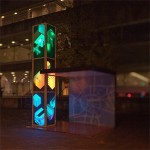