Digital video that has emerged from a co-operative
venture between Mul and musician Speedy J.

In the sound, several ‘loops’ were used that shift respective to each other. A similar technique was applied to the video. Mul wrote a small computer programme, which edited the shots in specific patterns.

The Urban night shots fit in seamlessly with the mood of
the ambient music. All scenes are recorded at Pernis
(Rotterdam) the biggest Dutch petrochemical site. 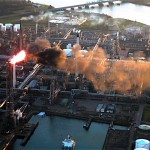 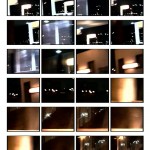