They flash past the city lights, in the form of neon signs, street lights – either or not distorted by raindrops or the motion of the camera moving past. They appear in strange corners, out of the sky or almost as all-encompassing as the rising sun. Sometimes the images move so quickly that you can barely take them in. Then the camera quiets down, zooming in on a face, a person, a detail. Yet real peace is rare in the city life currently generated at MU by multimedia artist Geert Mul and his cronies Koot (text), Speedy J (sound) and Lucas van de Velden (midi). Not only are you swept along by the images filling up the entire hall; the sounds and texts, too, contribute to the dynamic that makes viewing ‘Generating Live 2′ an experience. An experience that is still rare in media art, either because the technology quite often plays up, or because the artists lose themselves in soulless freaking and experimenting. Mul, however, expertly avoids both these pitfalls.

To those unfamiliar with media art, the battery of screens, cables and computers Mul has set up in a corner of MU is already impressive. Yet this nerve centre full of knobs and levers is not what it’s all about. It’s just the studio, the tool box, where Mul runs the software he himself developed in collaboration with the Rotterdam V2-Lab. It’s because of this software that the actual work comes into being as ever changing 20 minute cycles, enfolding on the four large screens placed here and there in the hall.

Notes
Talking to Mul about the way he develops his work is an intruiging pusuit. Before you know it, you’ve entangled yourself in the most abstract of concepts and structures. Still, some clarifying comparisons can be made. In that respect Mul’s work resembles cinema, although there is no coherent story line. “That’s right, I’m not too interested in the great static narrative. But my films should bear no trace of the other extreme: arbitrariness. So I look for as much coherence as is necessary to envoke an atmosphere or a theme without it immediately becoming a story.”
In order to curtail arbitrariness, Mul has added five keywords to his images. These vary from formal notions such as ‘landscape’ and ‘portrait’ to concepts as ‘day’, ‘night’ or ‘infrared’. He then uses these concepts as a kind of musical notes with which he composes a rhythm. A virtual rhythm, to be sure, but in essence no different from the rhythms we know through music. Everyone knows how compelling a catching composition can be to the ear. Mul wants to achieve the same with his images.

To make matters more complex, however, Mul doesn’t limit himself to imagery. Modern life reveals itself to all the senses and thus sound and the experience of space make important contributions to his installations. This he doesn’t do himself, but rather leaves to his mates: “high-quality guys”. Jochem Paap, better known as Speedy J, is the man behind the sound. Whilst he provided the first part of ‘Generating Live’ (last year, at Middelburg’s Vleeshal) with a fierce, fast drum ’n bas-like mix, this time around he has restricted himself to an almost ambient-type rhythm of city noise, with here and there a soft tune or a recognizable word. As a result, this installation does not appear to be a clip, but has a more cinematic, intimate impact.

Add to that the insistent text images by Koot – lines from film classics, subjected to graphic design – and this second version of regenerated city life from all corners of the world (from Hong Kong and Tokyo to Rotterdam and Romania) becomes even more compelling. The slogans shouldn’t be read as subtitles. Yet they add an extra dimension to what you see and hear. Thus, to your mind, the lonely busker and the cruising prostitute are easily linked to the words it’s very difficult to live without privacy and pride, isn’t it. But before you have the chance to answer this probing question, you’ve already moved three bridges and a nocturnal meeting along, swept away by the dynamic pulse of the city that never, nowhere, stops. 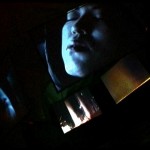 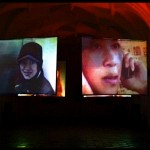 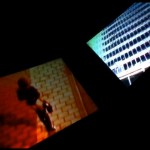 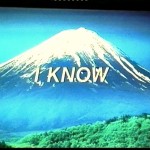 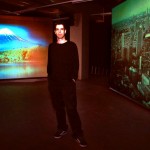